Being charmed by jewelry at an early age, Karine designed and crafted her own to wear. To her surprise, her friends liked them and wanted her to make some for them to wear too. Hence, she custom made pieces for them.

That was the beginning of Karine’s journey into the wonderful world of arts and craft of jewelry designing. She honed her abilities and later became the designer of her company, Karine Sultan Jewelry.

She is awed and greatly pleased whenever her designs become real and beautiful pieces, ready to be worn. It is her belief that every woman should wear jewelry to highlight her beauty and express her individuality.

As an esteemed artist on her own merits, her collection competed most favorably in the Parisian fashion jewelry setting for more than two decades. While in Paris, the company had sold more than 5 million pieces of jewelry in Europe, Russia, Japan, Africa, and Canada.

Karine loves to travel and this is often a source of inspiration- the people she meets, the sceneries she sees, the culture she experiences, and the sheer fun of going places.

This adventurous side of her has probably precipitated the company’s move to the United States. She said the company saw an opportunity to open the business in the US, so why not and why not settle in the West Coast, where glamour and celebrities abound.

In Los Angeles, California, Karine is bombarded by American culture and her creative juices are flowing. She is basking in the many wonderful stimuli around her: Americans in their own milieu, movie stars, celebrities, the landscape, scenic views, its art and fashion.

Just as in the past when her many journeys in Europe have provided her with inspiration, now her travels within the United States are giving her fresh ideas and a new perspective as well.

Karine Sultan is out to make a mark in the American fashion scene. 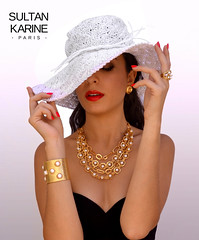 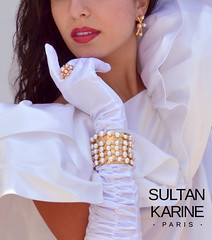 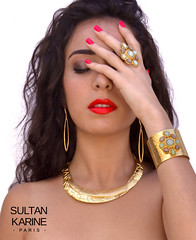